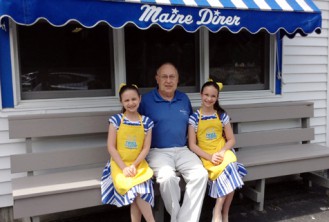 WELLS, Maine – On a beautiful Maine summer morning as the sun was just peaking over the pines into the garden, a van rolled into the Maine Diner parking lot, and then another. In a few moments out would come cameras and crew from the New Hampshire Public Television. The back of the Diner kitchen was quickly emptied and a makeshift studio suddenly appeared.

As the crew assembled, out came two little girls in blue and white striped dresses, winning smiles and yellow ribbons in their hair matching their yellow aprons.  Meet Hadley and Delaney. Only nine years old, the girls who are twins, are the stars of the PBS sensation “Twice as Good”. And today they were going to make some of the Maine Diner’s most famous dishes.

Twice as Good is a cooking show for kids airing on PBS stations across the country featuring the talented sisters. The show encourages nutritious cooking and healthy eating and uses its recipes and ingredients as a platform to teach science, math, history, and more.

The show travels to some of the United States most iconic places. Highlights from the fourth season (if you do the math that means the girls started their television careers at the age of six!) airing in 2016 include an episode filmed at Churchill Downs featuring the culinary traditions of the Kentucky Derby, an episode at Monticello focusing on Jeffersonian foods, and an episode at Boston’s Flour Bakery exploring the Science of Sugar and the Chemistry of Baking. Hadley and Delaney also visit the Executive Chef of the Biltmore during an episode focused on Carolina-inspired foods. Nashville’s Flyte Restaurant and Mount Vernon in Virginia serve as backdrops for an episode delving into the farm to table movement.

So how in the world did the twins end up at the Maine Diner? Simple. The show is produced and presented in association with New Hampshire Public Television.  Dawn DeAngelis, Chief Content Officer at NHPTV, recommended the Maine Diner as a great place through which the show’s viewers could learn about Maine’s indigenous ingredients such as lobster and blueberries and see how they are used in some of the Diner’s signature dishes.

“When “Twice As Good” picks a place to film, we search for a place that fits our criteria and then develop the show around what the destination is famous for,” said Lee Manoe, executive producer of the show.  “The location selects the dishes they would like to make and we write the script to pack in as much fun and educational content around the location as possible.  In the Taste of Maine episode, there are three locations–the Maine Diner, Libby & Sons U Picks, and the Portland Head Light.  So the Portland Head Light serves to set the stage and talk about Maine generally, Libby & Sons allowed us to dive deep into blueberries, and the Maine Diner allowed us to pull it altogether with Maine dishes.”

As they are filming their fourth season, no small achievement, Manoe credits the girls totally for the show’s success. “One aspect of the show which is fairly unique among cooking shows is that it is kid-reflective, meaning kid viewers watch these smart young women on screen (as opposed to watching an adult chef) and hopefully they see a little of themselves on screen and are inspired to imitate healthy cooking.  Another aspect we think is unique is that Twice As Good at its heart is an educational show that uses its recipes and ingredients as a platform to teach a host of subjects in a hopefully unique and interesting way.  So in almost every recipe there’s a bit about the culture of the dish, the geography of its ingredients, a related science experiment, or the like.”

This includes the Harvard Medical School Division of Nutrition, the Stanford School of Medicine, Prevention Research Center, Nutrition Studies Research Group as well as the Joe DiMaggio Children’s Hospital, St. Jude’s Research Hospital, the Pan Mass Challenge Benefiting the Dana-Farber Cancer Institute, Juvenile Diabetes Research Foundation, I Have A Dream Foundation, and the Make A Wish of Southern Florida.  It’s an amazing achievement at their age…  no matter what your age!

So after a morning filled with lobster rolls and blueberry muffins, what did the girls like best about their time at the Maine Diner? “The people at the Diner were the best part.  Mr. Henry, Mr. Williams, and Ms. Bonser were terrific.  Tell Mr. Henry we still have our Maine Diner t-shirts!” said the girls.

At the end of every show, Hadley and Delaney’s signature send off is a wish for their viewers’ culinary travels are “Twice as Good”.  We know we enjoyed meeting the girls “twice as much” and hope they come back soon.