Who would ever think of car trouble as lucky? For Clyde Curry, his wife Jane and a few friends, that twenty minutes wait by the side of the road would prove to be very serendipitous. 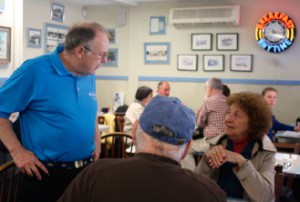 On their drive up from Dover, New Hampshire to the Maine Diner that morning, the car started sputtering, misfiring enough to warrant pulling over to the side of the road. After a spell they turned the key and the car hummed into action, as if nothing was ever wrong. The couples glided into the Maine Diner parking lot none the wiser that very soon, Curry was about to be tapped as the Six Millionth customer to be served by the Diner.

With cameras rolling and flashes blinking, Curry and his companions thought they were unwittingly taken part in a television commercial as they walked through the doors.  Expectant diners and employees watched in breathless anticipation as Dick Henry, owner of the Diner, counted down to the magic number. His hand on Curry’s shoulder, Henry gave Curry the good news.
“Congratulations, you are our Six Millionth customer!” to a very stunned Curry who kept saying, “I had no idea.” Cheers rolled out from all the well wishers, diner regulars and staff as he accepted the title.

Curry, and his wife Jane, have been coming to the Diner for over fifteen years. And while they have their favorites on the menu, it’s the blueberry pancakes that keeps them coming back.

Safely settled into a booth next to his cache of prizes, we asked retired ATF agent Clyde what he was going to do with his fifteen minutes of fame. Hereplied grinning, “I’m going to get an agent and work on becoming the Seven Millionth Customer.”
Along with breakfast on the house, Curry took home a Pepsi Golf Bag, yummy edibles of 7.5 lb cooked Turkey Breast from PFG Northcenter, Rib Eye steaks from Sysco Foods, an 8.5 lb smoked ham courtesy of US Foodservice, a $100 Gift Certificate from Shields Meats and Produce, a $50 gift certificate from Prime Steak House in Ogunquit, an overflowing gift basket from the Remember the Maine Gift Shoppe, a $100 Maine Diner gift certificate, gift basket from New England Coffee,  $10 Gift Card from Shaker Pond Ice Cream, a gorgeous blue and white floral arrangement from Downeast Flowers, and a giant sheet cake commemorating the moment in frosting from Baby Cakes.
One last thing on the prize list was the one-hour Swedish massage compliments of Your Body Works. Curry’s eyebrows shot up when he heard that… “Maybe I’ll give that to Jane.” He said with a wink. “We’re about to celebrate our 59th anniversary.”
“Having our six millionth customer was an excellent way to celebrate the first day of summer,” said Henry. “I can still remember the first day we opened the restaurant. We had forty customers and we made $40. The next day we had a hundred customers. Now we serve 120 an hour. And they keep coming back for more!”
Among the customers who just missed out on being the lucky 6th Millionth, were Ron and Diane Pach, of Durham, New Hamphsire. They’ve been Diner faithfuls for over twenty-five years. One of their favorite memories of the Diner is when friends from Scotland came for a visit and they had only two things on their must do list. Go to LL Bean and eat at the Maine Diner. Who knew the little blue and white landmark on Route 1 would be so loved the worldover?