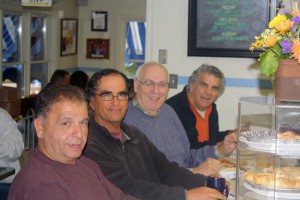 The Magnificent Seven didn’t have a thing on the Brotherhood of the Maine Diner.  Maybe the once upon a time strangers have not been hired to protect a small village from marauding bandits, but chances are they would be up for it. These seven men, as different as can be, have been having breakfast together at the Maine Diner every morning for years. They discuss life, love and solve the world’s problems every day by 9 a.m. What brings them all together?

Why the eggs of course.

Sitting in the number one spot, meet Ray Giagrando, a handsome man with considerable charm and an easy smile. He’s said to have been coming to the Diner for over 30 years but has been a part of the Brotherhood for over ten. The grand leader of the group he’s very proud of his prominent position with the guys and the waitresses. Seven days a week you will find him here. First in, first on the line. What does his wife say to him about eating breakfast out every day? “Goodbye” is what she says and he laughs.

Next to Ray, meet George Lambert, the ombudsman of the group. A loyal patron of the Diner for 22 years, George is a board member for several non-profits including the Laudholm Trust and the Pine Tree Society. There is a real camaraderie among these men, and George effortlessly guides the conversation between the day’s diner specials and community problems.  What makes the Diner special to him? George said “it’s the way the staff is treated here. They’re well paid and respected, they matter, so it’s more like family, a real community. And the eggs. Any style. Love the eggs…”

While the lads were finishing up their breakfasts and each other’s sentences, it is interesting to note how much the wait staff at the Diner loves this group.  There’s never a rush to see them gone and the stories get tangled up as any would at a family meal. Even though there are moments of seriousness, the sound of laughter is not far when they meet.

Next on the row of stools is tall, dark Richard Katz, the only eligible bachelor of the group. In the half hour of sitting with them, his single status was the subject of many of good-humored comments. Which quickly led to how much Richard enjoys the Maine Diner garden when “courting”. And that’s a story better left for another time. Ahem. A resident of Ogunquit, Richard drives down to the Diner every morning for the summer but spends his winters “away” in the Turk and Caicos.  Does he miss the company, the place, while he is gone? “You bet, there’s nothing like it” he replies with a quick smile.  “We give as good as we get if you know what I mean.”

Tom Ramsdell, a self professed “snow bird” has been having his early morning coffee and or breakfast since the Henry family opened the Diner in 1983. That’s a lot of cups of coffee. When asked about the particular comradeship the Diner inspires, he answered,  “This particular breakfast crew is the biggest and longest lasting crew that I have had to endure. We all have some things in common and we do disagree on some things also. Sometimes we disagree just for fun . . . I have had the opportunity to socialize with not only this group of guys, but many great gentleman over the past 30 years. All these friendships are friendships that I will cherish forever. The food and service at the Diner really is that great for me to stand at the door waiting for 7:00 AM everyday.”

What does the group do when one of the members is away? They move up a stool! “We’re like Seven Stools for Seven Brothers” laughs Ray. But make no mistake, the pecking order is alive and well in this group.  So the newest member was seated at stool four, Ken Naffah, quiet and reserved but with a definite twinkle in his eye about his spot in the “food chain”. Three years he’s been coming for breakfast a dedicated seven days a week. That’s a serious commitment.

You would wonder what keeps the Brotherhood alive and well, in a world where everyone is so busy and technology can keep us more isolated then connected. George elegantly summed it up.

“I believe that our camaraderie endures because of our differences, strange as this may seem.  Our work histories are quite dissimilar – an electrician, a former CPA partner in a worldwide accounting firm, now a published writer, a barber/realtor, a retired executive in the bottling industry who later ran a renown medical school, an antiquarian bookseller with a national reputation, the former owner of one of the largest building supply wholesaler in the country, and a purchasing agent in the technology field.  We are also ethnically and culturally diverse, with Italian, French, British, Lebanese, Canadian, and German ancestry. Our diversity gives us many topics to discuss. In spite of this diversity, we also share some common interests and similarities: we like to travel, we enjoy political discussions, we study and play the stock market, we are students of human nature and curious about the world, we kid each other but, above all, we respect each others viewpoints.”

The one question above all else, why did they choose the Maine Diner as “their spot”? And the answer is “we love the food, the waitresses, the owner, the other patrons and the unique “ambiance”.  It just feels right.